Share All sharing options for: The Continuing Jon Jones Debate: Nature Or Nurture? 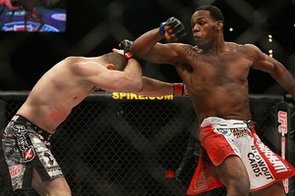 David Castillo from Headkick Legend wrote an interesting response piece to my recent story about UFC fans failing to embrace Jon Jones in huge numbers. His article is too in depth and complicated to summarize properly, and I encourage you to read it in its entirety.

It's quite fascinating to see Castillo and friends break down athleticism to the genetic level, while also carefully preserving the role of nurture in an athlete's success. I think it is obvious that Jones and other high level athletes are a product of both their inherent ability and their experiences. It's kind of a given. But it's important not to dismiss nature's role in an athlete's success.

There are thousands of athletes giving their all, working hard in the gym, excelling on the collegiate level. There are but a handful who will go on to see significant time as an NFL running back. What's the difference between those who make it and those who don't? It's often an almost incalculably small advantage in speed, strength, size, or quickness.

In the end, I'm not sure what Castillo's disagreement is. Is Jones a great athlete? Does he possess physical gifts most of his opponents do not? Is he fast and strong in a way a previous generation of MMA fighters, mostly men whose athletic careers topped out in high school or junior college, were not? Does Jon Jones have more in common with Walt Frazier or Zane Frazier?

Fighters, we've long been told, are just like us. That doesn't work for Jon Jones.  Jones isn't an aspirational fighter. No one looks at him and thinks - man I could do that if I just worked a little harder in the gym. No amount of work will make you Jon Jones, any more than 10 hours a day in the gym will make a YMCA baller into Lebron James.

That was the prevailing notion when fans thought about Royce Gracie. With enough training on the mat, you could be Gracie, or a reasonable proximally. It made the Gracie family rich and transformed the martial arts. You can't be Jon Jones. That's an advantage for the UFC, if they choose to use it. They've spent years differentiating UFC fighters from mainstream athletes. Jones is their chance to take a step back towards the athletic mainstream. He shows MMA fighters are real, top level athletes. Now we just need to market them that way.