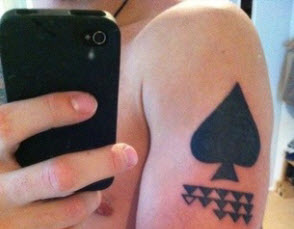 Bad Boy MMA star Alexander Gustafsson keeps track of his career progress on his arm.  I think it's a pretty cool, but wonder what would happen if Travis Fulton tried to do the same?

Gustafsson is one of the sport's rising stars at light heavyweight. When we caught up with him earlier this year before his fight with Matt Hamill, the Swedish star was confident a move to Alliance MMA would take him to the top:

Gustafsson has been training at Alliance since a loss to Phil Davis at UFC 112. Davis was able to control the fight on the ground, eventually finishing the Swede off with an Anaconda choke. Wrestling defense has been the bane of many European fighters. But rather than complain about his opponent's style and hope and dream for a UFC without top control wrestlers, Gustafsson decided to confront his weaknesses head on. He asked his coach, Andreas Michael, to set up a meeting with Davis's Alliance team near San Diego, California, and he's been there learning ever since.

"Coach Eric is a master in coaching and he is helping me with my gameplan and puts everything together," Gustafsson said. "I have to get better in everything - it's a on going progress."

Del Fiero agrees. "He has grown in all aspects of his game, if you look at his two last fights his confidence was through the roof and went in there and dominated. So yes, we're very happy in his over all MMA game improvements."