Does Jake Shields Deserve A Mulligan For His UFN 25 Performance?

Share All sharing options for: Does Jake Shields Deserve A Mulligan For His UFN 25 Performance? 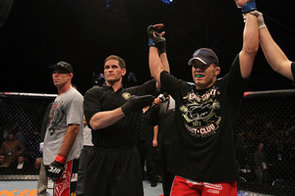 Much is being made of Jake Shields' devastating loss last night to Jake Ellenberger. Shields saw his vaunted takedown shrugged off by the rising prospect, then had his lights put out by a big knee in the clinch. To some, the loss is yet another excuse to suggest fighters matriculating anywhere but the UFC are necessarily overrated and flawed. I'm not sure that's fair.

At Bloody Elbow, the sharks are circling. Leland Roling suggests that Shields may be through as an elite fighter:

At 32 years old, Shields is at a crossroads in his career. He's no longer the young buck with the upside of youth. Age will have a profound, visible effect on his skills moving forward unless he can find a way to improve his apparent weaknesses in the stand-up department. Even if that happens, is it too late for Jake Shields? Did Jake Ellenberger lend credence to the notion that Shields is on his way out as an elite level talent?

Fraser Coffeen, a writer I respect a lot, thinks Shields may have been valued too highly as a big fish in Strikeforce's small pond:

I think those two gentlemen are a little quick to judgement. Shields recently lost his father. While Luke Thomas points out that some athletes have used their grief to motivate great performances, that's not always the case. Shields had a lot going on in his head last night in New Orleans. I don't think it's the right time to judge him as a fighter. Shields was still grieving. It could be a Jake Shields with his head on straight is better able to compete with the Ellenbergers of the world. His next bout will be a better indicator of where he stands in the UFC's welterweight division.