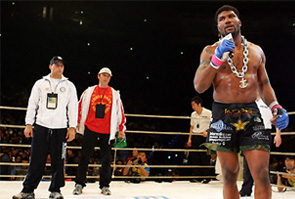 Despite success in the early stages of Quinton Jackson's career, the legend of "Rampage" would not ignite until he landed on the shores of the "Land of the Rising Sun" in mid-2001. Within six years the fighter transformed from relative unknown to beloved superstar on the heels of a spectacular run in Japan's Pride Fighting Championships.

Since then the 33-year-old has moved on to tremendous acclaim, but now he is calling for a chance to return to his roots.

In an interview with MMA Weekly, Jackson expressed an intense desire to fight on the UFC's return to Japan -- planned for February 26th, 2012 -- regardless of the outcome of his upcoming title bout against Jon "Bones" Jones at UFC 135.

"I love Japan, I miss the Japanese fans," Jackson stated. "I would love to go and put a show on in front of them."

Speaking purely as a fan still with a soft spot for the golden age of Pride, I can't help but grin at the prospect of seeing "Rampage" powerbomb an opponent in front of legions of adoring Japanese fans one last time. Make it happen UFC.