Stacey Verbeek And The Most Awkward Photo Of 'Mayweather Vs. Ortiz'

Share All sharing options for: Stacey Verbeek And The Most Awkward Photo Of 'Mayweather Vs. Ortiz' 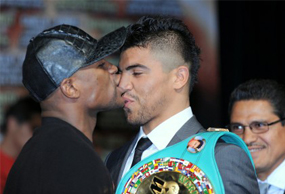 With the massive hype and posturing leading into this weekend's blockbuster boxing match between Floyd Mayweather Jr. and Victor Ortiz, it's inevitable that some of the smaller tidbits tend to fall through the cracks.

But this little number is hard to ignore. When photographer Stacey Verbeek snapped this shot during a pre-fight staredown, she accidentally created one of the most outlandish images of the week.

Between the inexplicable action in the foreground, and the leering man in the background, there's a lot going on in this photo. Gareth A. Davies of The Telegraph explained what actually happened.

It was actually a depth of field illusion. Mayweather was actually shouting out to the side after the pair had been nose to nose.

Good to know. That still doesn't stop it from being one of the more bizarre photos I've ever seen.