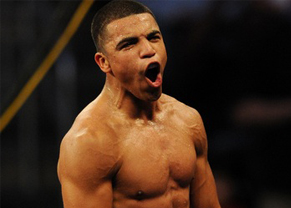 As is expected with any Floyd Mayweather Jr. opponent these days, WBC World Welterweight Champion Victor Ortiz agreed to Olympic-style drug testing per the terms of the pair's upcoming bout, meaning the 24-year-old has to submit to blood or urine testing at any given time.

Speaking with ESPN's Kieran Mulvaney, Ortiz explained while the testing is easy, it's the ‘random' part that's been giving him some problems.

"The drug testing has been perfectly fine. It doesn't bother me. I have nothing to hide," Ortiz said. "The only thing that kind of conflicts sometimes is that I might be at the gym or something, or going to the movies, and they'll call and say, 'Hey, we're at your house,' and I'm like, 'Ohhh, that's right.' So then [I have to turn to my friends and say], 'Hey guys, I'll catch up with you in a while.' And then I can't go to the bathroom, so I [look at the testers and say] 'Hey, you want to go to the movies?' I bring them everywhere with me, man. I take them to lunch with me.