Share All sharing options for: Wrestler HHH Breaks Down Some UFC Weaknesses 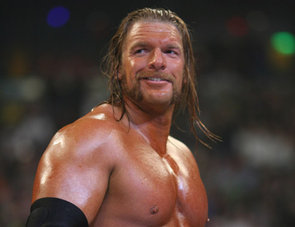 Pro wrestler HHH isn't just one of that sport's biggest stars. He's also married to Stephanie McMahon, making him wrestling royalty. That's what makes his recent comments to AOL about the UFC so instructive. They aren't the rogue ramblings of a random wrestler. It's an educated opinion from a savvy businessman:

Moviefone: How do you think WWE and pro wrestling needs to evolve as UFC and MMA grows in popularity?

Triple H: I don't think we have to evolve. It's two totally different things. I think now especially there's this thing like, "oh it's very similar."

I don't see us needing to evolve to what UFC does because quite frankly sometimes the fights are long and boring, guys lying around and sometimes the fights are fast and over in five seconds. I've always thought one of the things about us, if you look at us solely from a sports standpoint, is that we always give you a good show. We're never going to give you a crap game.

I think if anybody needs to evolve, it's them. Give more of an entertainment standpoint. Give more form; they just have fighters who walk in in T-shirts and shorts and just stand there and then they fight and then they win and then they go "thanks, I'd like to thank my sponsors" and then they leave. The whole world was up in arms when Brock was flipping people off and was cussing at the beer company because they didn't give him any money and everyone thought, "oh my god, he's disrespectful," -- the whole world was talking about it. They couldn't wait to see him get beat up. And then he did well, and he beat some guys and then people jump on his bandwagon going "Brock's the greatest." I'm good friends with Floyd Mayweather and Floyd would be the first to tell ya, "I make the most money in boxing and I have the biggest buyers because I have the biggest mouth." He'd be the first guy to tell you that. That's what it's about. Sports is entertainment.

In a lot of ways, HHH is right on the money. So many UFC fighters are virtually indistinguishable from each other. There is a fine line between cartoonish characters and realistic and interesting public personas. The UFC could stand to walk a little closer to that line.