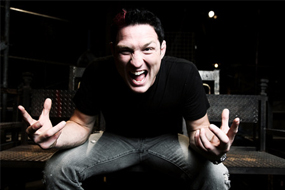 On August 7th, UFC middleweight Jason "Mayhem" Miller was reportedly arrested for assaulting his sister. A month later Miller explained the incident on Monday's episode of The MMA Hour, stating, "If I had to do it all over again, I would do exactly the same thing."

In an interview with Ariel Helwani, the 30-year-old coach of "The Ultimate Fighter Season 14" described how a situation that started as a well-intentioned plea against drunk driving quickly became overblown with a little help from TMZ.

"I'll just say this: my sister was not in any state to drive, and I stopped her from driving. However, she was in a state to file a police report, which is now all over with. It's all finished. It was unfounded...a Miller family experience that got out of hand."

"Look, my sister is a big girl. She's like 200 pounds and strong, muscle girl. I had to hold her, like, for real hold her. There's no wrist-controlling your big sister, you know what I'm saying? You've got to like, hold on to her."

"It's funny, because I'm in the stage of my career where people care about some petty redneck drama that I got into. It's really surreal. I didn't even think that was a big deal."