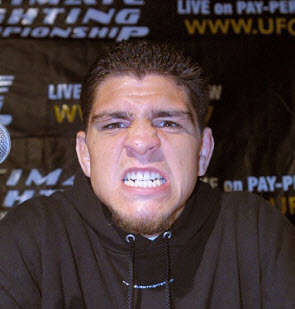 That's not a typo.

Kevin Iole of Yahoo! Sports, who interviewed UFC President Dane White over the weekend about the recent fiasco that involved Nick Diaz, explored the scenario of what a win would possibly mean for the Cesar Gracie-trained fighter.

And while White didn't demonstratively say that Diaz could still contend for a UFC title (the reporter actually used the term 'likely'), he certainly didn't outright kill the concept:

"We'd be right back in that position again. But we'll deal with it when that happens. I have too much [expletive] to do to worry about what might happen down the road. I wake up every morning and find out I have a whole long list of problems to deal with. Nick Diaz took a week out of my life dealing with this, but next week, it's going to be something new."

Diaz, a former Strikeforce welterweight champion, was supposed to collide with his UFC counterpart, 170-pound kingpin Georges St. Pierre, in the UFC 137 main event, which is scheduled to take place at the Mandalay Bay Events Center in Las Vegas, Nevada, on Oct. 29, 2011.

But according to White, Diaz "freaked out" and "couldn't handle the pressure of a main event." So he replaced Diaz with Carlos Condit in an odd press conference last week, during which White appeared to be completely stressed and perplexed.

Then just 24 hours later, rather than punish Diaz further for his bizarre behavior, White rewarded him with a co main event slot opposite B.J. Penn on the same card. And now it seems he might even have more candy waiting in his back pocket if Diaz can push past the "Prodigy."