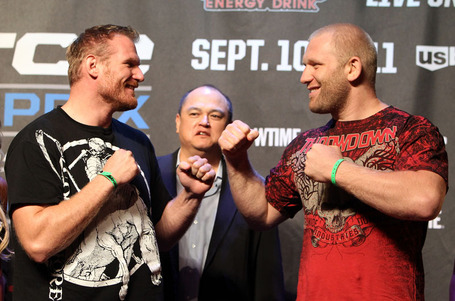 Two formidable relics from the Japanese mixed martial arts (MMA) heyday will collide tonight (Sept. 10, 2011) at the U.S. Bank Arena in Cincinnati, Ohio, in the semifinals of the Strikeforce Heavyweight Grand Prix Tournament.

For about three years, Josh Barnett and Sergei Kharitonov competed side-by-side under the Pride FC banner, but their paths never crossed inside the ring. Both men competed in heavyweight/open weight tournaments during that time albeit at different moments in time

Barnett punched his ticket to the second round of Strikeforce's grand prix with a second round submission of the overmatched Brett Rogers back in June, while Kharitonov knockout of Andrei Arlovski earlier this year.

The winner of this match, which will serve as the main event of the Showtime telecast, will advance to the final and likely emerge as the favorite to win the entire tournament.

It's a showdown between two very experienced professionals who haven't seen a decision in more than three years. In the case of Kharitonov, it's been nearly twice that amount of time.

Barnett: "The Baby-Faced Assassin" is the more well-rounded fighter, able to mix it up on the feet and finish fights on the floor. His blend of submission and catch-wrestling skills is very unique in the sport. In fact, you'd be hard-pressed to find anyone who fights like Barnett in any weight class here in the United States. He's also very quick and nimble, which makes his scrambles rather remarkable for such a big man. Performance-enhancing issues have dogged him throughout his career, but he has somehow remained adamant that he is innocent and his system is free of illegal substances. Barnett is very popular overseas thanks to his larger-than-life personality and consistent work in Japan, which includes professional wrestling appearances in addition to his MMA endeavors. Winning this tournament would certainly elevate his profile once and for all stateside; however, his acrimonious relationship with Ultimate Fighting Championship (UFC) President Dana White still hangs around his neck like an albatross.

Kharitonov: "Paratrooper," a Russian army veteran, was an aspiring boxer who turned to MMA about eight years ago. He hasn't focused primarily on the sport since that time, which is perhaps the reason he is not further along like many of his contemporaries, including Barnett. He's dabbled in K-1, Sambo and even flirted with a run to the Olympics as a boxer during that time. At just 31 years old, he's already got a wealth of experience. His sporadic MMA activity and lack of noteworthy opposition in the last year, which includes a submission loss to Jeff Monson in 2009, makes Kharitonov a big question mark heading into this bout. He was the dark horse heading into the tournament and it seems as though he still holds that title. He clearly has the skills and power to hurt anyone he touches, but it's unclear how, if at all, he can handle someone as so well-rounded as Barnett. It's been a very long time.

Barnett and Kharitonov have been around long enough to know what works best for them to ensure victories.

And while Barnett is not afraid to exchange blows with anyone, he knows that his bread and butter is his submission game. However, Kharitonov is a Sambo specialist, which means that he should be prepared to defend the takedown when Barnett attempts to lock him up and toss him to the mat.

Kharitonov doesn't have a fantastic jiu-jitsu background. Not like Barnett's, anyway. He has the ability to submit opponents, but no one at Barnett's level. He is a powerful striker who hurts people. And that's exactly what he is going to try and do tonight.

Submission for Barnett or technical knockout for Kharitonov. It's that simple.