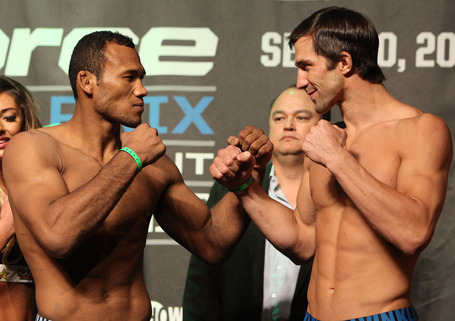 It won't serve as the main event of the evening, but the 185-pound clash between division champion, Ronaldo Souza, and number one contender, Luke Rockhold, is the only fight on the Showtime card with a world title on the line.

The five-round match up will take a backseat to the semifinals of the Strikeforce Heavyweight Grand Prix tournament.

Souza bested Tim Kennedy via unanimous decision in Aug. 2010 to win the vacant strap, which was previously held by Jake Shields prior to his departure to the Ultimate Fighting Championship (UFC). The decorated Brazilian jiu-jitsu specialist then submitted Robbie Lawler with a rear naked choke earlier this year in his first title defense.

Rockhold, meanwhile, has struggled to recover from various injuries that have kept him out of action for more than 18 months. One of the promotion's, as well as the sport's most promising middleweight prospects, Rockhold has won all six of his fights under the Strikeforce banner since his debut more than three years ago.

Five of those fights Rockhold was able to win via tapout, which will be incredibly difficult to replicate against a submission stud like "Jacare."

Souza: "Jacare" is perhaps the most successful jiu-jitsu fighter-turned mixed martial artist. He is among the very best submission aces in the sport today, leveraging his superior ground skills to finish fights (11 out of 14). Unlike most fighters with similar backgrounds, however, Souza can hold his own on his feet. Look no further than his recent win over the aforementioned Kennedy, who is a very aggressive and powerful striker.  He certainly isn't a Muay Thai Kru, but Souza does just enough to get his fights where he wants them, which is horizontal. That's likely because Souza has simultaneously competed in MMA and prestigious jiu-jitsu tournaments since 2003. After more than eight years of practice he's bound to have sharpened his other skills ... enough to win a major world title.

Rockhold: Like Souza, Rockhold got his first taste of MMA after competing in jiu-jitsu. He is nowhere near the level of his Brazilian counterpart, but the American Kickboxing Academy (AKA) prospect has very sound skills. He's been able to integrate the lessons of Dave Camarillo, who teaches a more aggressive, MMA-centric form of jiu-jitsu, to emerge as one of the most exciting up-and-comers in the division. Injuries have prevented him from fighting in the last year or so, but he has been working diligently in the gym to ensure that he continues to develop and grow. Rockhold has been branded as the most athletic and promising fighter at AKA, which is quite the compliment considering the company in San Jose. He's flown relatively low under the radar, but that could all change very quickly with the performance of a lifetime at the U.S. Bank Arena. And he knows it.

Both fighters are extremely skilled on the ground. Nonetheless, Souza has the clear advantage in that department.

Rockhold will need to rely on other aspects of his game if he intends to have any success on Saturday night. He is also coming off a very long layoff, as well as being thrown right into a 25-minute championship fight. Rung rust and endurance have to be major concerns heading into Cincinnati. The good news is he is smart enough, and capable, of avoiding dangerous positions.

Souza will likely do what he always does: Box until he sees an opening then take it and angle for a finish. More often than not, it's a recipe for success. In fact, the odd's are not in Rockhold's favor.

Souza finishing this fight via technical knockout or Rockhold pulling off the submission of the century are both very unlikely scenarios. If Rockhold is smart, and doesn't attempt to test his jiu-jitsu skills against his world class counterpart, this fight should remain upright for a majority of the time. That means that Rockhold will win via technical knockout or either fighter will earn the decision. If Rockhold tries to play footsie, "Jacare" might just take a souvenir home to Manaus.