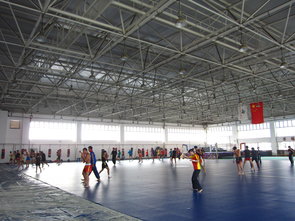 The potential of mixed martial arts in China is enormous. Success seems imminent, but one thing is missing - a Chinese athlete with legitimate international level skills. The leading impediment, in many ways, is a lack of appropriate training. Chinese fighters have significant expertise in arts like Sanda and learn some of the basic skills that could theoretically make them successful in MMA. But they lack a focused government sponsored MMA training program - or did until now:

This week, Xian Physical Education University, Team Quest, and Legend Fighting Championship established a partnership dedicated to developing MMA in China by targeting the sport at its core: coaching and training. Although Chinese fighters have world-class stand-up, it is generally thought that their less advanced wrestling skills and ability to integrate their striking and grappling has hindered their development on the world stage. And when the university approached Legend to discuss potential coaching partners, Team Quest – known for the Olympic wrestling roots of founders Randy Couture, Matt Lindland, and Dan Henderson – was an obvious choice.

"MMA’s exposure and appeal in China will be huge for mainstream acceptance internationally. With a rich history in martial arts, it’s only natural for Chinese fighters to be competing at a world-class level. But the only way this can happen is for world-class MMA coaches to bridge the gap for these aspiring fighters. For the past decade, the MMA scene has been pioneered by members of the Team Quest fight team. Now it’s time to open up new doors and pass that knowledge on to a new generation of fighters in China. This is an exciting opportunity for Team Quest and our coaches. Keep your eye on these young Chinese fighters. They will be making waves in the world of MMA very soon."