Share All sharing options for: What Anderson Silva And Antonio Rodrigo Nogueira Said To Brazilian Fans At UFC 134 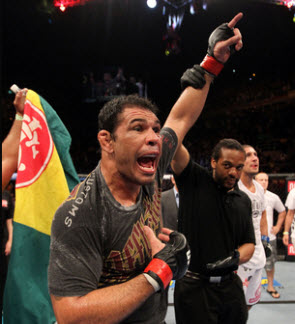 After beating Brendan Schaub at UFC 134: Rio, Brazilian MMA legend Antonio Rodrigo Nogueira was so excited about competing in his home country of Brazil for the first time in his legendary 41 fight career that he gave an impromptu speech in Portuguese before addressing the American pay-per-view audience in fluent English.

In case you were wondering what Big Nog had to say to his home town fans, there's a translation after the jump. We've got Anderson Silva's Portuguese post-fight comments translated too.

"Listen guys, I come from three surgeries, where I operated my hip and my knee, where I was inactive for a year, four and a half months walking on crutches, and had three and a half months to train for this fight. I only took it because of you guys, to fight in Brazil. I only accepted this fight to fight for you guys, because it's my fortieth fight, it's my first fight at home, so thank you very much you guys, thanks guys. Come to my afterparty at Bandeirantes. A big hug to the marines, they fight for you guys"

Translator Tom Mendes explains what Anderson is talking about:

The line from the movie is making reference to applicants from the police trying to get into the BOPE police force, after the applicants chants "Caveira" or "Skull", which is the symbol for BOPE, Captain Nascimento replies; "gentlemen, you'll never be, you'll never be (one of us)" saying they'll never be a BOPE officer because it's too hard to get in, meaning the corrupts and the weak will never be a part of BOPE. Anderson is referencing that by making a statement that no one will take his belt, because it's too hard. The line he uses is the same "senhores, nunca serão, jamais serão" from Nascimento, but the way it is said in Portuguese can be applied to "you" or "they". Crowd went crazy when he said that too. Important to point out that Anderson has been saying that I believe ever since he beat Franklin the second time, though I could be wrong which fight he started saying that.