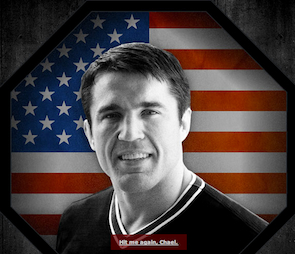 "In what parallel universe can you punch a man 300 times, he wraps his legs around your head for eight seconds and they declare him the winner?!"

That's vintage Chael Sonnen. And the reference to his last-minute submission loss to Anderson Silva doesn't even touch his recent over-the-top, pot-stirring and controversial remarks that have him Public Enemy Number One in Brazil.

Indeed, the former top middleweight contender has become quite the comedian. In fact, Ultimate Fighting Championship (UFC) recently gave him his own stage at the "Evans vs. Ortiz 2" UFC Fight Club Q&A in Philadelphia (See the video here).

And he delivered a solid set.

He's seemingly never at a loss for words these days, especially when it comes to picking a fight, promoting an event or insulting non-Americans. But match him up against a U.S. military veteran like Brian Stann and suddenly, like magic, Sonnen goes silent.

Perhaps it's just total respect. Or maybe it's the fact that the pair have trained together in the past. Most likely it's a combination of the two.

Sonnen recently described his initial feelings on the 185-pound showdown on "The Fight Fix:"

"It was different with Brian. They drew his name out and I said 'Oh, gosh no!' I couldn't sleep. I've never contacted an opponent. Nobody contacts an opponent. That breaks every unwritten rule there is. I contacted Brian. I said 'Hey listen, I can't sleep. I'm so bothered by this news and it caught me out of left field and I don't know what to do here.' And Brian Stann wrote me back. And he said 'Chael, yeah it did come out of nowhere, but with all the things going on in the world today, us fighting for up to 15 minutes just doesn't matter."

Chael Sonnen, bothered? The same man who served as the inspiration for his very own, fan-made quote generator (ChaelSonnenSaidSo.com)?

One thing is for certain: When Sonnen and Stann touch gloves at at UFC 136, which takes place at Toyota Center in Houston, Texas, on Oct. 8, 2011, the Team Quest fighter will be without his biggest weapon, his mouth.