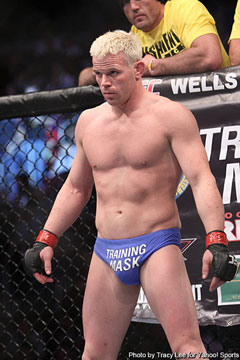 Dennis Hallman has come forward with an explanation for his "banana hammock" short-shorts at UFC 133. He tells the MMA Hour simply: "I lost a bet."

Photo by Tracy Lee via Yahoo! Sports. Highlight video of the fight after the jump.

"I won't say what the bet was about," said Hallman "but I lost a bet to those guys and losing the bet meant that I got to wear some speedos."

The shorts were bad enough that UFC President Dana White gave his opponent Brian Ebersole the $70,000 bonus that was reserved for Submission of the Night as a reward for getting Hallman's awful shorts off the TV quickly with a first round TKO stoppage. There were no submissions on the card.

"That wasn't a Speedo. I've seen Speedos before, that had to be custom made," White told Yahoo!. "(Ebersole) earned every dime he got!"

"I was just worried about that cup, and his uniform malfunctioning to be quite honest. I knew I was fine from there. I've been training with some very, very good black belts in Melbourne, Australia," Ebersole added.

Ebersole also tweeted after the fight:

@ufc Had my post-fight checkup done, and it included forensics. No Staph, MRSA, Chicken Pox, or Semen was found on the swabs. I'm all clearless than a minute ago via web

UFC 133 Results and Analysis: The Night Of The Banana Hammock