Share All sharing options for: Vitor Belfort Has A Long Road Ahead Of Him For A Title Shot 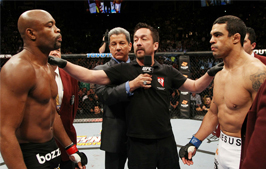 Vitor Belfort wants a second chance. After bulldozing through Yoshihiro Akiyama at UFC 133, the Brazilian openly campaigned for another shot at Anderson Silva's middleweight title.

In theory the idea sounds just fine. The UFC's middleweight division, while improved compared to recent years, has always been rather top-heavy. Belfort is easily one of the most skilled fighters around at 185 pounds, so ideally few would question his merit to the claim. But the reality of the situation is much more difficult.

Before his bout with Akiyama, Belfort challenged Silva for the middleweight title at UFC 126. After months of hype, with the lights at their brightest, "The Phenom" promptly lost in spectacular fashion.

Had it been a classic battle, a rematch would have been the easy play. But something like that? The bizarre, one-sided affair that gave us a seared image of Belfort crumpled to the mat after a stunning front kick. Something like that is hard to forget.

"It's tough to do," Dana White said of the middleweight's prospects in the post-UFC 133 press conference. "If they (Silva and Belfort) went out and had this war, back and forth -- if it were like the Chael Sonnen and Anderson Silva fight (at UFC 117) -- that'd be one thing. But it lasted what, 35 seconds?"

This is the image that Belfort must rebuild as he starts to ascend the mountain once more. Only this time there will no be no fast-tracks, no shortcuts, and no handouts; if the 34-year-old gets there, it's because he deserves to be there.

A victory over Yoshihiro Akiyama -- a respected fighter, but one who was mired in a two-fight losing streak -- is a good start. But one step forward is really just that; a step. Several more must follow. For the time being, it seems that Belfort's grind has just begun.