UFC On Versus 6 Promotional Push Begins

Share All sharing options for: UFC On Versus 6 Promotional Push Begins 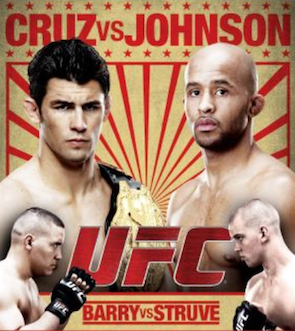 It may be almost two months from now, but the promotional drum has already begun to beat. With tickets for the event at the Verizon Center going on sale later this week (Fri., Aug. 12), and an open media workout scheduled to take place tomorrow (Tues., Aug. 9), UFC today released the official event poster.

Not only is the event "free" on cable television (if that makes any sense), but it will also feature a major championship match.

Bantamweight champion Dominic Cruz will once again defend his 135-pound title, taking on number one division contender, Demetrious Johnson, in the UFC on Versus 6 main event of the evening. Pat Barry and Stefan Struve, heavyweights, will collide in the co-featured fight of the night.

MMA Nation Senior Editor, Luke Thomas, plans to be on hand tomorrow at Team Lloyd Irvin Martial Arts and Fitness gym in Arlington, Va., for the open media workout. Cruz, Johnson and local standout Mike Easton -- who will make his Octagon debut on the card -- are all expected to be in attendance.

Be sure to check MMA Nation often for full coverage of the UFC on Versus 6 open media workout, as well as for the latest event updates right up until fight night. In the meantime, check out our comprehensive UFC on Versus 6 archive right here.

UFC On Versus 6 Fight Card: Fabio Maldonado Out With Injury