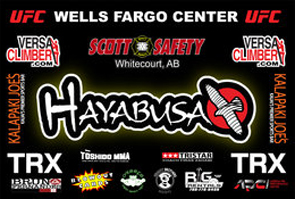 Last night some of you might have noticed that Rory MacDonald was in the cage without a banner. It went missing, but MMA Nation has recovered it.

For years, banners were an afterthought for fighters and management alike. Today, if handled correctly by a fighter's management team, they represent a significant source of income, a nice way to represent the companies and individuals that support a fighter through the prefight grind.

MacDonald's sponsors for his bout with Mike Pyle were a diverse group. They included a clothing company (Hayabusa), two high end developers of fitness equipment (Versa Climber and TRX) and oil services company (Scott Safety), a card company (Blowout Cards) and a bevy of local gyms where MacDonald trained for the fight. Kalapaki Joe's, a Hawaiian restaurant, was the most interesting of the sponsors. In exchange for the banner placement, MacDonald was invited to Hawaii to relax after the bout.