UFC 133 Results: Vitor Belfort Once Again Goes Nuts On The Back Of The Head

Share All sharing options for: UFC 133 Results: Vitor Belfort Once Again Goes Nuts On The Back Of The Head 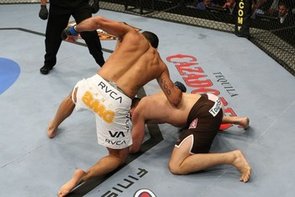 Vitor Belfort swarmed all over Yoshihiro Akiyama last night at UFC 133. After he knocked the Japanese star down with a glancing left, Belfort pounced on his hapless foe and landed several telling blows that caused referee Mario Yamazaki to stop the fight. "The old Belfort was back," the MMA internet, as one, screamed. Unfortunately for people who care about the details, they were punches to the back of the head. Again.

In his triumphant return to the Octagon against Rich Franklin back at UFC 103, Belfort finished former UFC champion Rich Franklin in an almost identical fashion - landing a series of illegal or quasi legal punches. And, like with Fedor Emelianenko and Dan Henderson last week on Showtime, no one seemed to notice. At the time, I was shocked:

Joining my media colleagues at the post fight press conference, I awaited what I was sure would be a storm of controversy. Franklin had lost by foul play - what would Dana White say? Would he criticize the officiating? Would he announce a rematch so we could see a bout contested under the unified rules? What would be Belfort's excuse for his illegal strikes?

Instead, unbelievably, there was silence. Worse than silence - Belfort was actually awarded Knockout of the Night and given a significant cash bonus. Not a single question was asked to anyone on stage about the illegal blows that had just finished a high profile main event.

Belfort, again last night, showed no concern for his grounded opponent. Bloody Elbow's Brent Brookhouse makes a strong point that Akiyama could have avoided the issue by not being knocked down on his face. I agree that Belfort was well on his way to victory - legitimately. That said, a fighter shouldn't have to worry about defending against illegal techniques. The back of the head is off limits and officials, like it or not, are going to have to start enforcing the rules.

I realize it's going to be hard. Things happen quickly. It may sometimes be impossible to pause a fight, punish the violator, and continue the contest. By then, the damage may have been done. A fighter who is easily winning may be handed an unpopular loss when he loses control and can't control his impulse to smash. But the rules, presumably, are there for a reason.

It's hard for linebackers to pull up once the quarterback has let go of the ball - but they do it. It's hard for boxers not to land that one extra shot after the bell rings - but we expect them to. Nascar drivers can't just run each other off the track - we expect a certain level of fair play.

In the real world, we ask our soldiers to uphold certain standards of conduct - even in life of death circumstances. We ask politicians to obey parliamentary procedure - no matter how dumb the opposition is. It's not too much to ask a cage fighter to follow the rules, even when they are going for a finish.

The rules are in place to protect fighters. Ignoring them, even for what seems like a good reason, is the slippery slope to disaster.