PHOTO: Ebersole And Hallman Contend For Worst Look At UFC 133

Share All sharing options for: PHOTO: Ebersole And Hallman Contend For Worst Look At UFC 133 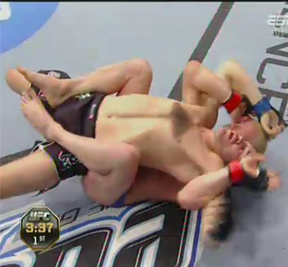 When the bout between Brian Ebersole and Dennis Hallman was promoted to UFC 133's main card after a slew of injury withdrawals, many complained that the two fighters were undeserving of the slot. As it turns out, the fight may just have been Saturday night's most entertaining event -- if only for the absurd spectacle that came from the pair's unfortunate fashion choices.

What was started as a normal UFC fight took an abrupt turn after Ebersole strolled to the Octagon proudly sporting a perfectly-formed, arrow-shaped tuft of hair sprouting out of the center of his chest. Without question it was a bizarre scene, yet it would somehow be topped just moments later, as Hallman paraded out to the cage wearing nothing but a bright blue banana hammock.

The combination was beyond words. To compound matters, the pair immediately took the fight to the floor, creating an indescribable mix-mash of sights that almost felt as embarrassing as it was hilarious.

Ebersole eventually won via a brutal knockout in the first round, but at that point it didn't really matter. We were all winners. 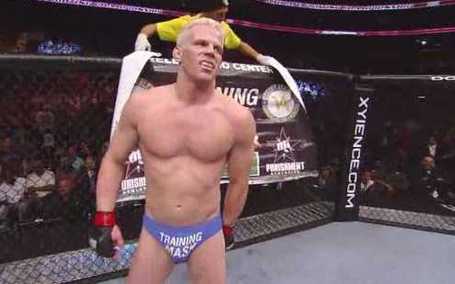