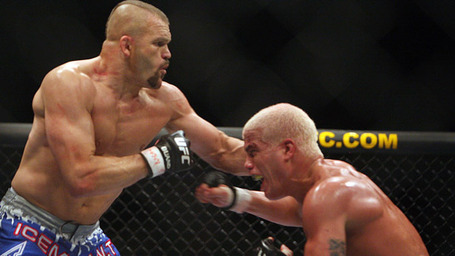 Tito Ortiz vs. Frank Shamrock
UFC 22: "Only One Can be Champion"
Lake Charles Civic Center in Lake Charles, Louisiana
Sept. 24, 1999

UFC Middleweight Champion Frank Shamrock was on a tear, mowing down all the 200-pound competition that the UFC put before him ... with the exception of Ortiz. Coming off a huge win over Guy Mezger in their rematch, Ortiz was was well on his way toward earning rockstar status. And a win over a much more experienced champion like Shamrock would certainly cement it. The first three rounds were competitive, Ortiz was doing his takedowns thing, while Shamrock was getting off with his strikes. Prior to the start of the championship rounds, it appeared that Ortiz was not only holding his own, but could possibly pull off the upset if he could hang tough for just 10 more minutes. He couldn't. His gas tank ran completely dry in the fourth round and the bottom fell out. Shamrock capitalized, swarming Ortiz with a flurry of strikes that forced Ortiz to tap into submission. It was a horrible way to go out, especially after performing so well in the earlier parts of the fight. The loss, particularly the manner in which it went south so fast, taught Ortiz a valuable lesson moving forward. Never again would he let his endurance betray him in a fight.

Ortiz had reigned supreme atop the 205-pound division for nearly four years. After his massive win over Ken Shamrock, Ortiz -- with his value at an all-time high -- set sail, using his cache as leverage in contract negotiations. Not interested in letting Ortiz hold the division hostage indefinitely, the promotion booked an interim title fight between Randy Couture and Chuck Liddell, which "The Natural" somehow managed to win via technical knockout. So when Ortiz decided to return to action nearly a year removed from the Shamrock win, he'd have to first fight Couture in a title unification bout. Despite the long layoff, Ortiz was favored to defeat his much older opponent. He didn't. Couture proved to be just too much, overwhelming Ortiz for five rounds en route to a unanimous decision win. To add insult to injury, late in the fight while having Ortiz stuffed up against the cage in an awkward position, the old man gave a smile and literally spanked his much younger counterpart. Ouch.

No longer with his beloved light heavyweight belt, Ortiz agreed to meet former friend and training partner, Chuck Liddell, in a number one contender eliminator bout. Ortiz claimed that he and Liddell had a pact to never fight one another; however, Liddell sang an entirely different tune, saying Ortiz ran for the hills after the Shamrock win because he was scared. And the only reason he emerged from the shadows was because he thought he could defeat Couture easily and then continue to duck Liddell, or at the very least, demand more money to accept the fight. With his leverage now gone, and a desire to reclaim his belt, Ortiz had no choice but to fight Liddell, whether or not his ducking claims were indeed accurate. It was clear from the beginning that Ortiz was not himself. He appeared hesitant and unwilling to take the fight to Liddell, who kept his distance and peppered Ortiz with punches whenever he got too close. One of those punches, delivered in round two, hurt Ortiz and sent him backpedaling into the cage. Liddell swarmed, unleashed a furious assault on his wounded opponent, who at this point was reduced to defense mode. It was only a matter of time before the referee stepped in to stop the fight, which he did, with little legit complaints from Ortiz. It marked the first time ever that Ortiz had experienced back-to-back losses. Perhaps more alarming, he appeared to lose the fight with Liddell before it even started.

After putting together a five-fight win streak, which ended when his bid to reclaim the light at UFC 66 was thwarted by Chuck Liddell in their rematch, the future of Ortiz was uncertain. He needed a boost. And what better way to get a ton of attention than to beat up the man, Dana White, who runs the world's most successful fight promotion and who also happens to be a quasi adversary. Prior to his return to the promotion in 2006, Ortiz requested that a clause be inserted into his contract that would allow him box White in an exhibition match. Odd, I know. But he apparently really wanted to hit him ... legally. White reluctantly agreed to the silly request and didn't think much of it. So when Ortiz requested that it happen, the UFC marketing machine went into overdrive, announcing that a 90-minute special, "Bad Blood," would air on Spike TV. On it, Ortiz and White -- an amateur boxer -- would actually go toe-to-toe. To promote the exhibition, White released a series of videos that showed him training and sparring to prepare for the three-round match. The special was also teased throughout that season of The Ultimate Fighter (TUF). It got so much coverage that the Nevada State Athletic Commission (NSAC) soon took notice and demanded, for safety reasons, that it oversee the match, requiring a higher degree of coordination -- both men needed to be approved for boxing licenses. Then, shortly thereafter, seemingly just like that, Ortiz told White in a voicemail that he was "letting him off the hook." He failed to appear for weigh ins and the entire situation turned into one big waste of time. White was so angry that he actually aired the 90-minute special, showing all the hard work he did and ending it with Ortiz failing to show up at the last minute. It was a major hit to his reputation and image, which already wasn't too snappy at the time.

Ortiz was on the last fight of his contract and already had one foot out the door. He was once again on White's bad side, and was coming off a disappointing draw to Rashad Evans. He was not in the best position to negotiate. And White wasn't about to give him any more ammunition or an easy fight that would send him into the free agent market an imminent winner. So he booked Ortiz opposite Lyoto Machida, a frustrating fighter who had been branded a boring fighter for his elusive fight style. But it was, if nothing else, effective -- no one had ever figured out how to beat him yet. And the odds that Ortiz would be the first were low. Ortiz made it clear that he had zero interest in fighting Machida, but reluctantly agreed to do so to prove that White was wrong. Well, he was right. Machida easily coasted to a three-round decision, refusing to let Ortiz get anywhere near him sans a late-fight submission attempt from Ortiz that he was ultimately able to escape. With the loss, his second in a row, Ortiz was cut loose. He'd entertain other offers from competitors, but never signed any deals. During his time off, he underwent major spinal fusion surgery on his bad black, which he blamed for his string of bad luck. He'd ultimately make his way back to the Octagon, but his misfortune would continue for two more agonizing years.