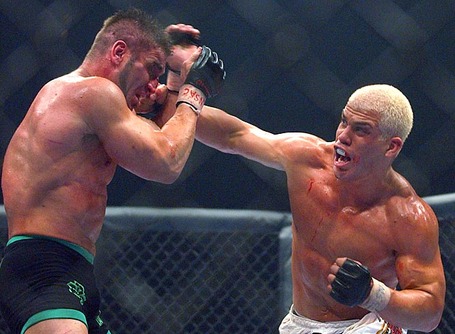 Just two years prior, Ortiz and Mezger met at UFC 13: "Ultimate Force," in a "lightweight" four-man, one-night tournament. Mezger won the match via first round submission, but the result was mired in controversy. For Ortiz, who jumped at the rematch opportunity when Vitor Belfort went down, it was the perfect opportunity to exact revenge and prove that their first encounter should have indeed ended differently. He took to the cage that night with a purpose, determined to not just destroy Mezger, but pound him into embarrassment. He did just that, forcing his overwhelmed opponent to tapout because of strikes. Immediately after the stoppage, Ortiz was so pumped up that he flew into an adrenaline-fueled tizzy, flipping off Mezger's corner team, which was led by mixed martial arts (MMA) legend Ken Shamrock, and donning a custom t-shirt that read "Gay Mezger is my Bitch." Shamrock, who at the time was known as a very bad man, had to be restrained from attacking Ortiz after the fight, as well as backstage. And just like that, a legendary rivalry was born.

Frank Shamrock, the aforementioned Ken's adopted younger brother, had run roughshod throughout the 200-pound division. In fact, in two years, he cleaned it out, winning six straight fights, which included a submission (strikes) over Ortiz. Shortly thereafter, citing lack of competition, he announced his premature retirement from the sport and relinquished his title. With the belt now up for grabs, the promotion turned to its most marketable star, Ortiz, and a a ferocious Brazilian who went by the name of Wanderlei Silva, to battle it out for the vacant title. It wasn't a barnburner or a fight for the ages, but Ortiz managed to score a five-round unanimous decision victory. It would, however, have a major impact on the future of both fighters, as well as their respective promotions. Ortiz, obviously, remained with the UFC and defended his title five times over the next three years. Silva, meanwhile, landed in Japan and went on to compile a gaudy undefeated record (15-0-2) for Pride FC. It's impossible to imagine how the sport, and UFC vs. Pride FC rivalry, would have been shaped had Ortiz not sent Silva packing that night Tokyo.

Before UFC 100, this event was billed as the "biggest"event in the promotion's history. And for good reason. Shamrock was viewed as a crafty, highly-regarded -- albeit aging -- MMA legend. Ortiz was seen as the brash, extremely dangerous young hungry lion. The pair also had beef, with Ortiz disrespecting Shamrock and his Lion's Den team at every possible opportunity. He talked the talk, and now Shamrock was stepping in to make sure he walked the walk. It was a fight literally four years in the making. And when fight night finally arrived, fans were dripping with anticipation. Sure, Shamrock had not seen the inside of the Octagon in nearly six years, although he was active under the Pride FC banner, but that didn't matter. Not on this night ... even though his best days were already clearly behind him. It was personal. Unfortunately for Shamrock, Ortiz was just too much to handle at the advanced stage of his career. He did clip Ortiz and drop him with a hard punch in the opening frame, but other than that, the fight was patented Ortiz: Relentless takedowns and brutal ground and pound. Ortiz beat him so bad that Shamrock's corner would not allow him to get off his stool to start the fourth round. The dominating win catapulted Ortiz, as well as the UFC, which was hurting for a big payday up until that time (and got it), into another stratosphere. In fact, Ortiz's head got so big that he went on hiatus for nearly a year, renegotiating a contract that ensured he was paid top dollar.

At this "late" stage of his career, Ortiz had been fighting for more almost a decade. He'd essentially helped carry the promotion through its dark, "human cockfighting" days and opened the door for younger fighters to pursue their MMA passions. Forrest Griffin was one of them. And when he collided with Stephan Bonnar in The Ultimate Fighter (TUF) Finale, he did for the promotion in one fight what Ortiz, or any other veteran for that matter, couldn't do in 15: Get MMA over on a mainstream audience. Griffin was getting credit (half of it at least) for putting the UFC on mainstream map, which did not sit well with Ortiz. He was returning from another long layoff, but was determined nonetheless to show Griffin, and the millions of new viewers tuning in from around the globe, how real men fight. He came out guns blazing, taking down Griffin in the first round and nearly finishing him with blood-letting strikes from the top position. From that point forward, however, Griffin wised up and kept his distance, stuffing takedowns to avoid a painful repeat of the opening frame. He continued with this effective strategy up until about 90 seconds remained in the fight. At that time, Ortiz finally landed another takedown, and in doing so, likely locked up the controversial split decision win. It was close, but Ortiz proved that he still had some gas left in his tank and was ready to make another title run, setting the stage for an eventual blockbuster rematch with division champion Chuck Liddell three fights later.

Five years, five fights, zero wins. That was Ortiz's box score heading into his critical showdown with Ryan Bader. Ortiz had to actually plead for one more chance to prove that he could perform. And the promotion didn't do him any favors by matching him up with a tomato can. On the contrary, Bader appeared to be a bigger, younger and hungrier version of Ortiz. He was also coming off his first-ever career loss, which meant that he, too, had something to prove. On paper, it appeared to signal the end for Ortiz. With Ortiz's job, and potentially career, hanging in the balance, he was in a must-win situation. Dana White made it crystal clear that his fighting days were over if he didn't get back in the win column. Against the odds, literally, Ortiz pulled off the upset. Not only that, but he did it in thrilling fashion, hurting Bader with a short punch, grabbing his neck when he stumbled forward and sinking in a fight-ending guillotine choke to save his career. It was a magnificent performance, one that earned him an incredible opportunity four weeks later, a spot opposite Rashad Evans in the UFC 133 main event when Phil Davis went down with an injury, which, with another win, can get him right back in the thick of the division in record time.

(Stay tuned as we update this thread shortly with "Tito Ortiz's Worst Fights, A Top Five List." In the meantime, feel free to share your "best" Ortiz moments and memories in the comments section below.)