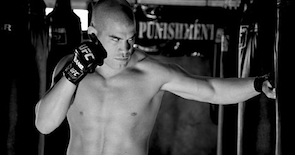 Tito Ortiz has gone from zero to hero in 116 seconds flat.

That's precisely how long it took him to submit (and upset) Ryan Bader last month at UFC 132. And, in doing so, was apparently just enough time to earn him a spot among the top 10 best 205-pound fighters in the sport today.

All this despite the fact that "The Huntington Beach Bad Boy" just won his first fight in almost five years.

"Tito's popularity has never been bigger. Tito hasn't been this popular since 2003. A lot of people thought he was going to get finished by Bader, but he came in and pulled off the huge upset. I think a lot of people have gotten behind him and are excited about his resurgence.... Tito catapulted himself back into the top 10 and stepped up on short notice to take this fight with Rashad Evans, which I give him a lot of credit and respect for."

Prior to the fight with Bader, Ortiz -- who has historically butted heads with White -- was in jeopardy of losing his job with the promotion. In fact, he had to plead for just once more chance.

He got it and delivered, in spades, when it mattered most.

On top of it all, he agreed to step up on short notice to replace an injured Phil Davis opposite Rashad Evans this weekend in the main event of the injury-riddled UFC 133 fight card. Those types of favors, win, lose or (gasp) another draw, go a very long way in the eyes of Zuffa execs.

But if you listen to Ortiz, it's an opportunity to prove that he's been a legit division threat this whole time. He has just been the victim of injuries and bad breaks:

"i don't think about losing. Over the last five years, look at those matches. Tell me which ones i truly, truly lost besides Lyoto Machida and Matt Hamill. i lost some close matches. i have some great things to achieve in this world and I'm not done yet. I'm going to prove it on Saturday night. So we'll see what happens here on Saturday night."

If we do indeed look back on the "close matches" that Ortiz dropped aside from Machida and Hamill, we see just one -- a split decision defeat to Forrest Griffin in their rematch at UFC 106. Surely, he's not referencing the technical knockout loss to Chuck Liddell in late 2006.

Promoters will promote. And fighters, especially savvy vets like Ortiz, will say just about anything to attract additional interest among fans.

But is anyone "in the know" buying any of this based on cold hard facts? Hope is the thing with feathers.