Marloes Coenen Posts Picture Of Her Paycheck From Forza LLC

Share All sharing options for: Marloes Coenen Posts Picture Of Her Paycheck From Forza LLC 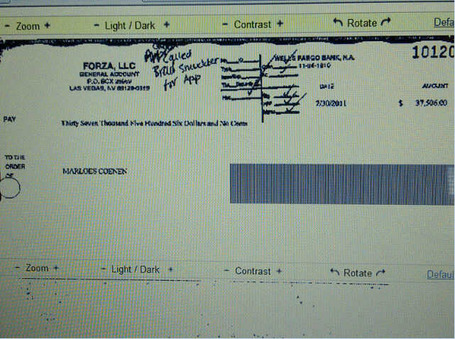 @danawhite hurts me 2 hear things about my management that are not true.#Ibelieveinthetruth #proof

This picture seems to directly challenge Dana White's claims that Golden Glory, Coenen's management group, was insisting on being paid by the promotion first and that they then paying their fighters as subcontractors. White cited this Golden Glory's unwillingness to change this financial arrangement as the reason for the Golden Glory fighters under Zuffa contract being dismissed.

Clearly there is a power play going on here and Marloes Coenen is caught in the middle between Dana White, Strikeforce and Martin de Jong and Golden Glory on the other.

Long-time fans will remember when the UFC went after Randy Couture by releasing pay stubs that contradicted his public claims of pay amounts, bonuses, etc. White did not immediately respond to Coenen's Tweet. More on this story as it develops.

How this squares with her earlier claim that she liked Golden Glory handling her payments I do not know.