UFC 133's Constantinos Philippou Talks Boxing Vs. MMA Or Is It Costa? Costantinos?

Share All sharing options for: UFC 133's Constantinos Philippou Talks Boxing Vs. MMA Or Is It Costa? Costantinos? 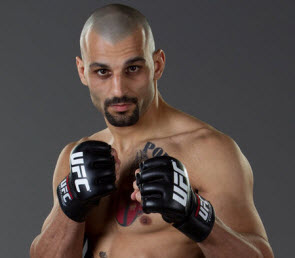 Constantinos Philippou. It's not that complicated is it? Just a mere 21 letters, only 7 syllables. Wikipedia and Sherdog both agree on the spelling.

But wait, UFC.com calls him Costa as in: Costa Philippou's Many Twists of Fate.

Philippou will face Jorge Rivera in a middleweight bout at Saturday's UFC 133.

I'm not looking forward to live blogging his maincard fight against Jorge Rivera Saturday at UFC 133. I'm looking forward to watching it but not writing it up. I think I'll go with Costa if that's what the UFC puts on the screen. In the full entry we'll hear from Costantinos Constantinos Costa on the difference between boxing and boxing in MMA.

Does anyone have The Ultimate Fighter Team Ortiz vs Team Liddell handy, I'd be interested to know what they called him in his elimination bout with Joseph Henle

"You can't use the same technique that you use in a boxing fight," said Philippou. "You won't be able to stay up close and bob and weave and exchange five, six punch combinations because they'll take you down. It took me a while to get used to that because my whole boxing career, they were telling me to throw a minimum of four, five punches and stay in the pocket because I'm a short guy. They wanted me to fight kind of like (Mike) Tyson. With MMA that doesn't work. You've got to be light on your feet and you gotta move. A great example is James Toney. He's a great boxer, but he'll never be a great MMA fighter. He's flat on his feet, he's moving and bobbing and weaving and two seconds later he's going to be on his back and boxing is over."