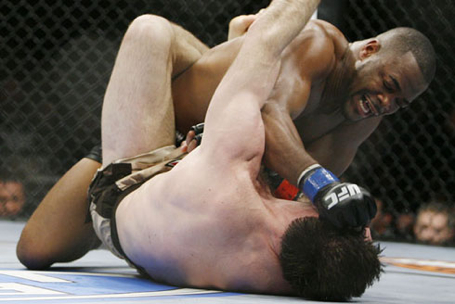 Evans, a National Junior College (JUCO) wrestling champion and three-year starter at Michigan State University, made the transition to mixed martial arts (MMA) shortly after his graduation in 2003. He picked up five wins on the regional circuit before he was selected to compete on The Ultimate Fighter (TUF) 2 as a heavyweight. He wasn't the favorite to win it all by any stretch of the imagination. In fact, he was portrayed as a boring fighter, as well as a "showboating" underdog who did little more than get under the skin of coach Matt Hughes. Despite the criticisms and doubts, Evans never changed or wilted under the pressure, winning three decisions over Tom Murphy, tournament favorite Mike Whitehead and Keith Jardine much to the shock and chagrin of Hughes, as well as company president Dana White. He accomplished what no one thought he could, punching his ticket to the finals opposite the much larger Brad Imes. Evans would ultimately go onto win the bout with Imes, as well as the "six-figure" contract that comes along with being a TUF winner, but his fight with Jardine in the semifinals was perhaps the most pivotal ... for different reasons. Not only did Jardine emerge as the second best heavyweight fighter on the show that season, but he also ended of forging a strong friendship with Evans. It only grew stronger after, and perhaps in part because of, their clash. When filming wrapped, it was "The Dean of Mean" who invited Evans to New Mexico, where a MMA mastermind in the making, Greg Jackson, was waiting to mold future stars. The rest is history.

Fresh off his first finish inside the Octagon, a technical knockout of Jason Lambert at UFC 63, Evans was rewarded with his first main event slot against newcomer Sean Salmon. With a pep in his step, Evans strutted into the eight-walled cage with not only his confidence at an all-time high, but also with a new sweet nickname, "Suga." Salmon, like Evans, had a strong wrestling background, which appeared to give Evans a little trouble in the opening frame. That changed real quick in the opening minute of the second round, when Evans uncorked a hellish high kick that connected flush on the face of his unsuspecting opponent. Salmon crumbled and crashed to the canvas in an unconscious heap of lifelessness. It was a stunning finish, one of the best you will ever see, which the promotion has replayed at every possible opportunity ever since. It, along with his development, was so impressive that the UFC felt he was ready to enter the next echelon of competition -- a fight against former champion and legend, Tito Ortiz. It was a graduation of sorts, punctuated with a highlight-reel knockout that never gets old no matter how many times you watch it.

This was an odd moment in the career of Evans. A crossroads. After the Salmon slaughter, he was fortunate to register a draw against former 205-pound champion Tito Ortiz at UFC 73: "Stacked" in his next appearance. He then barely beat Michael Bisping in the UFC 78: "Validation" main event, which was designed to determine which TUF winner was legit (it didn't at the time), via split decision. Unfortunately, the performance seemed to raise more questions about Evans' ability and whether or not he had what it took to truly breakthrough. So what better way to test a young man's mettle than to match him up against another former champion, Chuck Liddell, who essentially mowed down all the light heavyweight competition put before him for the better part of seven years. Sure, Liddell had recently been knocked off his championship perch, dropping an unprecedented two straight fights, but he was on the road back to redemption after battling, and defeating, rival Wanderlei Silva in an epic three-round war. For Liddell, and most fans at the time, Evans was a sacrificial lamb. There was just no way that a wrestler not named Randy Couture could deny Liddell, the promotion's most bankable star, another run -- perhaps his last -- at a world title. He simply hit too hard. His experience was too much. And his legendary takedown defense was second to none. On fight night, with one crushing right hand, Evans changed everything. He connected with a clean, powerful right hook that melted the "Iceman" immediately. It was not your garden variety knockout. This was vicious, bordering on illegal. And Evans only had to touch his chin once to turn his lights completely out. The torch wasn't passed, Evans straight up stole it on the biggest stage possible in front of millions watching with jaws agape. Validation, finally.

Strike while the iron is hot. Three months after the shocking knockout of Liddell, Evans was rewarded with a title shot against inaugural TUF winner, UFC Light Heavyweight Champion Forrest Griffin. It marked the first five-round fight for Evans and he didn't appear to be in any type of rush when it finally began. In fact, Griffin kept him at bay with his length, jabbing and kicking Evans for the better part of two rounds. Griffin appeared to be well on his way toward coasting to a decision victory. Then, out of nowhere, Evans caught a low kick and blasted Griffin with a straight right hand, which made him fall to the canvas. Evans remained calm and selected his shots carefully until it was clear that Griffin was not just stunned, but also hurt. He picked up the pace, connecting with a flurry of additional strikes that forced the referee to step in and stop the fight. A new champion was crowned. And his name was none other than Rashad Evans.

Evans, just one fight removed from losing his new belt in devastating fashion to Lyoto Machida, was determined to remain in the win column and work his way back to the top. With a win over Thiago Silva already in his rear view mirror, Evans shifted his attention to another former champion, Quinton Jackson. "Rampage" did his good friend Keith Jardine dirty at UFC 96, and Evans was out for revenge. This was a showdown, Rampage vs. Evans, that was more than a year in the making, which included trash talk, insults and challenges every step of the way. It was supposed to culminate after the pair was done filming TUF 10 as coaches; however, Jackson accepted the role as B.A. Barracus in the "A-Team" motion picture, delaying the grudge match even further. After the massive build up, Evans and Jackson finally collided, but it wasn't the fight that fans expected. Rather than an emotionally-charged brawl, Evans implemented a strategic "cat and mouse" gameplan where he would only exchange blows to set up numerous takedowns. The fight did have a few bright spots, including Rampage nearly finishing Evans in the third round, but "Suga" held on to win a unanimous decision thanks in large part to not losing his cool once the cage door closed. It was a brilliant, albeit disappointing (from a fan's perspective) strategy that was good enough to get him what he wanted: An opportunity to reclaim his 205-pound belt. Hard to argue with a result like that.

(Stay tuned as we update this thread shortly with Rashad Evans' Worst Fights, A Top Five List. In the meantime, feel free to share your "best" Evans moments and memories in the comments section below.)