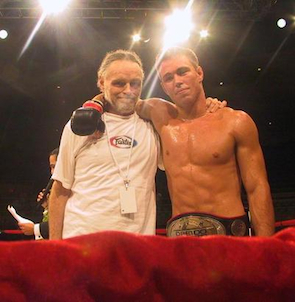 Jack's death, which was described as "unexpected" yet "gentle" by his grieving wife, is fresh on the heels of MMA trainer Shawn Tompkins' untimely and sudden demise at age 37.

It's safe to say that Jack was a positive, instrumental influence on his son, who made an incredible run prior to his UFC debut, winning 14 consecutive fights and capturing Elite XC and Strikeforce world titles along the way.

The younger Shields ultimately met his match when he collided with 170-pound deity Georges St. Pierre at UFC 129 in April 2011, losing via lopsided unanimous decision. He was looking to rebound from that loss in little more than two weeks (Sept. 17, 2011) in the main event of UFC Fight Night 25 opposite Jake Ellenberger in New Orleans, Louisiana.

There is no word at this time if Shields' heavy heart will force him to withdraw from the pivotal divisional showdown. It would be hard to find any fault in such a decision under the difficult circumstances.

In the end, Jake will likely do what he thinks his father would have advised, which seems to have served him more than well up until this point in his life.