Share All sharing options for: Is Mo Lawal Prepared For Roger Gracie's Jiu-Jitsu? 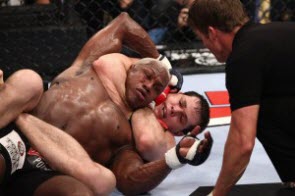 Both men have been talking about the upcoming match. I thought it would be fun to compare and contrast their comments.

"I think if he can be slippery and keep the fight standing, he'll have a chance not to get submitted," Gracie said. "But I think if we fight on the ground, his chances are not very good."

"I think that I train less ... in jiu-jitsu because he's not a great jiu-jitsu player, and I'm sure I won't have to worry about him trying to submit me," he said.

"[His standup is] better than what I expected it to be," said Lawal, having seen tape on Gracie. "I thought it was going to be terrible. He came out throwing jabs and one-twos and teeps and some leg kicks. He's solid."

"Maybe if I slip (he can take me down)," Lawal said. "I don't know. I don't think so, but I can take him down. I'm not afraid of his jiu-jitsu at all. He has a great closed guard, but sometimes when you get hit, that guard opens up.