Why UFC Champion Anderson Silva Should Stay At Middleweight

Share All sharing options for: Why UFC Champion Anderson Silva Should Stay At Middleweight 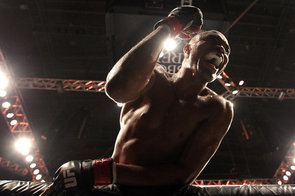 I understand the desire to see Anderson Silva, the greatest fighter in the world at 185 pounds, expand his horizons and challenge the top dogs at 205 and 170 pounds. After all, Silva often makes it look so easy that it's hard to imagine anyone of the same size giving him much of a fight. It's easy to forget that weight classes were invented for a reason.

Silva is healthy at 185 pounds. For his frame and build, it's the perfect weight class. If he goes down to 170, as some are suggesting he should to fight the great Georges St. Pierre, he will be drawn, weak, and sucked dry of energy. If he packs on more than 10 percent of his total body weight, an astronomical amount, he will be slower, bulkier, and still smaller than his proposed opponents.

Anderson Silva is the most amazing fighter in the world because he is the perfect size for middleweight, fighting other men of like dimensions. It's what makes his highlight reel feats possible. Anything that takes away from that is a bad thing.

Silva is the best. He's proved it time and time again. He doesn't need to chase other fighters. If they want to claim to be the best, they need to usurp him. Anyone who wants to fight the king should make the journey to middleweight. He's earned that right with his performances in the cage.