Is Yoshihiro Akiyama In Too Deep At UFC 133?

Share All sharing options for: Is Yoshihiro Akiyama In Too Deep At UFC 133? 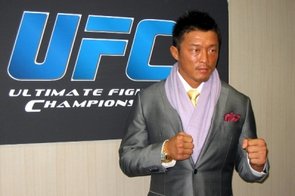 Japanese MMA’s greatest villain, a judo player of Korean descent named Yoshihiro Akiyama, has had an interesting tenure in the Ultimate Fighting Championship. Akiyama has marched to a different drummer, moving up the card, facing progressively stiffer competition, his opponents going from journeyman to star to contender.

This is a normal progression – when a fighter is winning. Akiyama has lost two in a row, and struggled badly in the fight he did manage to win on the judge’s cards. But somehow, defying belief and logic, he’s scheduled for the co-main event of UFC 133 this weekend in Philadelphia.

There is something special about Akiyama. All eyes are drawn to the dapper star and some fans have taken to calling him "Sexiyama." He’s also wowed fans in the cage, winning three Fight of the Night awards in a row.

For fighters, however, that’s a dubious honor. It means you are likely getting beaten up badly. Even when you win the kind of fight that takes home awards, you’re punishing your body.

The question, then, is how much Akiyama has left to give. At 35, I’m not expecting great things from the judo player. In truth, he hasn’t been the same since a brutal knockout at the hands of Kazuo Misaki in December, 2007.

The KO certainly didn’t leave the Japanese star shell shocked – he’ll stand and trade with the best of them, often to his detriment. But it does seem to have left him befuddled and a step slow.

Akiyama gets hit – a lot. You can get away with that against Michael Bisping. Against Vitor Belfort getting hit means the fight is over. Expect Akiyama to be staring, perhaps sexily but staring nonetheless, up at the lights in the first round.