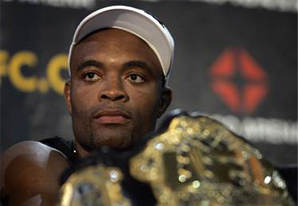 A week after signing an endorsement deal with fast-food behemoth Burger King, UFC middleweight champion Anderson Silva has already raised the stakes. "The Spider" inked an deal with Nike Brazil on undisclosed terms Tuesday morning, according to the company's Director of Sports Marketing, Luis Alexandre.

The signing comes on the heels of an enigmatic 90-second viral video that was released onto the internet just days before. In it, Silva -- dressed in a red shirt adorned with the Nike ‘swoosh' -- glares disconcertingly into the camera until the clip reaches impossibly unnerving levels.

In truth, the announcement is yet another sign that MMA is slowly oozing into the public conscious. Like George St. Pierres' Under Armour sponsorship, and Jon Jones and Urijah Faber's K-Swiss campaign, Silva is nudging the sport forward by ingraining himself as an identifiable figure within the deeper sense of the collective mainstream.