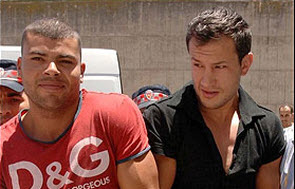 Lee Murray, the one-time UFC fighter who is serving time in a Moroccan prison for his role in the biggest cash robbery in UK history may have just caught a break.

According to the UK Mirror, one of the forensic officers who investigated the 2006  £53million Securitas depot heist has just been convicted of destroying evidence in another case.

What does this mean for MMA's baddest apple?

Probably not a lot since he fled to Morocco and successfully fought extradition back to the UK. He was convicted and sentenced to 25 years in Moroccan prisons. His cohorts who were caught and tried in Britain may have caught a bit of a break though.

Police chiefs are now ­bracing themselves for a legal fight that could see the gang ­winning a ­retrial.

Their legal teams are expected to argue that as the officer disposed of exhibits in one case, she could have done the same during their clients' ­investigation - although there is no evidence that this happened.

Five men were jailed in the UK and another, ­cagefighter Lee Murray, in ­Morocco for the ­audacious robbery at a ­Securitas depot in Tonbridge, Kent.