Forrest Griffin Had Reason To Be Distracted

Share All sharing options for: Forrest Griffin Had Reason To Be Distracted 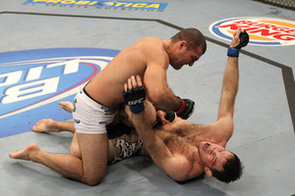 As we watched UFC 134 it was striking to a mixed audience at my house how little former UFC light heavyweight champion Forrest Griffin seemed to have invested in his fight with Mauricio "Shogun" Rua. The listless Griffin was pounded out by the Brazilian star in the first round, a result that seems inevitable in retrospect after reading over some of Griffin's prefight comments.

After the fight, the mystery of the Forrest's lack of fire was solved by UFC President Dana White.  Griffin's wife, it seems, was about to go into labor at any moment:

"I have so much respect for him for coming in and taking this fight, being in this situation," White told MMA Fighting immediately after the fights. "He knew he was going to be in this situation. Like he said, she was supposed to be nine days later. He was just texting with her before we came in here and she thinks she's ready to go. I'm leaving tonight, he's flying home with me tonight."

Griffin has a lot to learn as a full time parent. He's already learned lesson number one: the due date is just an estimate. The baby will come when he or she is darn well ready - it's safest to clear your calendar at least two weeks before and two weeks after the scheduled date.