Share All sharing options for: Brazilian Fighters Bring Home The Highlights At UFC 134 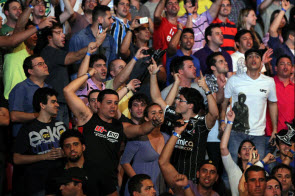 Yushin Okami in the second round.

Forrest Griffin in the first round.

Brendan Schaub in the first round, Knock Out of the Night winner.

Ross Pearson in the Fight of the Night.

Brazilian fans were treated to a slew of wins from their countrymen at UFC 134 in addition to the 4/5 main card performance, a Brazilian fighter took home the win on 6/7 undercard fights, the only exception being a Yves Jabouin vs Ian Loveland bantamweight bout that featured no Brazilian fighters.