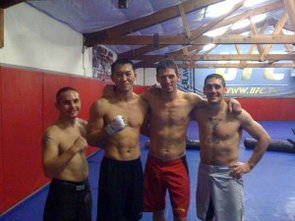 The mood is tense, but hopeful tonight in Oregon as Yushin Okami's Team Quest training partners and coaches prepare to watch the event on pay per view. Chael Sonnen took the time to answer 15 quick questions, but he's not the only member of Team Quest watching with wide eyes tonight.

"Yushin is in amazing shape right now. His conditioning is second to none and physically looks stronger than I have seen before. Yushin must have taken a page out of Matt Lindland's book because he's been in the gym everyday, drilling and sparring," Team Quest General Manager Scott McKendry said. "Along with the help of Yushin's Jiu Jitsu coach, Gen Isono and Team Quest's Jiu Jitsu black belt Fabiano Scherner, his ground game is looking solid. Matt & Chael have been pushing Yushin hard through sparring rounds. When Yushin Okami enters the octagon, the world will see the best Yushin to date!"

Okami's trainer Matt Lindland thought the team had claimed another world title before Silva pulled off a miracle win over Sonnen last year. Now, they are counting on Okami finishing the job.

"I really wanted to see Chael take the title," Lindland said. "Yushin winning will be the next best thing."