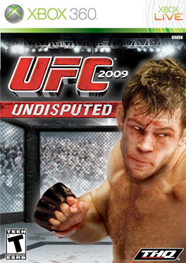 Just like its namesake, the ‘UFC Undisputed' series has quickly become the gold-standard from which mixed martial arts video games are judged.

The series' next iteration -- ‘UFC Undisputed 3' -- is scheduled to be released in North America on January 3, 2012. To commemorate the occasion, the UFC and publishing partner THQ have kicked off a contest to determine the next cover athlete for the upcoming game.

The contest starts on Friday, August 26th, and concludes at noon on September 30th. Fans that vote for their favorite fighter at www.ufc.com/ufcundisputed3 will also have an opportunity to enter into a sweepstakes to win tickets for an upcoming UFC event.

"We are excited to let fans choose the cover athlete for UFC Undisputed 3," UFC President Dana White announced in a press release. "Frankie, Georges, Anderson, Jon, and Cain are five of the most popular athletes in our sport and each wants to be on the cover. We love making our fans a part of the process and we'll leave this one up to them."