The 1990s Vale Tudo Boom And Bust In Brazil

Share All sharing options for: The 1990s Vale Tudo Boom And Bust In Brazil 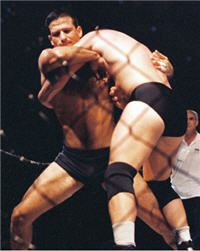 After the emergence of the UFC in the U.S. and Pancrase, Shooto and other "real fighting" promotions in Japan, all of which featured Gracies or their students, Brazilian Vale Tudo came back in a big way.

The field included a variety of Brazilian styles, including capoeria, luta livre and the inevitable jiu-jitsu representative. In this case the fearsome Carlson Gracie student Amaury Bitetti.

Unfortunately for Bitetti, he met up with Sidney Goncalves Freitas aka "Mestre Hulk" in the finals and Hulk caught him with a winging hook to the top of the head then followed up by attempting to bash Bitteti's skull through the canvas.

Here's a contemporary TV report from the time, featuring commentary from Rickson Gracie at ring side.

Here's one of the bouts that made a legend of everyone involved: Mark Kerr vs Fabio Gurgel Part 1 from World Vale Tudo Championships 3 on January 19, 1997.

Next we have the legendary feud that made stars of the Chute Boxe camp when their champion Jose "Pele" Landi-Jons beat "Macaco" Jorge Patino.

1996 also saw the first installment of one of the great feuds of early MMA -- Chute Boxe's Jose "Pele" Landi-Jons against BJJ star Jorge "Macaco" Patino. Macaco had been on a tear in 1995 and most of 1996. He was a much more aggressive and dominant fighter than the Gracies had typically been. While certainly not as skilled as Rickson, he used power and surprisingly good wrestling technique to overwhelm his opponents. Pele, the champion of the upstart muy thai based Chute Boxe camp, astonished the Brazilian scene with his refusal to be intimidated by the bully Macaco and beat the BJJ fighter down in two great fights. Heres some highlights:

Gracie Magazine chronicles the event that got Vale Tudo kicked out of Rio de Janeiro for the next decade:

On September 27 of 1997, a major MMA event unfolds in the Tijuca Tennis Club, in the city of Rio de Janeiro. On the program are stars like Murilo Bustamante, Jerry Bohlander, Renzo Gracie, Eugenio Tadeu and Oleg Taktarov. Everything runs smoothly till the final fight, between Renzo and Eugenio. The two fight a frantic battle, and the first round ends without a hitch.

But, in the second, when the fighters are pressed up against the fence (it takes place in a pentagon, hence the name Pentagon Combat), some spectators start to slip past the security and kick the fence. This is not a normal event. Soon, rival spectators are outraged by this and enter the mix. Soon there are dozens, hundreds. Suddenly, the lights in the gymnasium go out, plastic chairs sail through the air.

There are reasons to spare for the rivalry between Jiu-Jitsu and luta livre. But how did such a grand event as Pentagon Combat come about, and why did it exploit this rivalry? For those of you that thought it improbable to find the name of Sheikh Tahnoon bin Zayed, founder of the ADCC, here' a surprise. Jiu-Jitsu master Nelson Monteiro, at the time, was in the United Arab Emirates with the extremely wealthy martial arts lover, and came up with the idea of putting on a large scale event. "It wasn't even to exploit the rivalry," relates Nelson, now owner of two gyms in California. "Those were the days of Jerry Bohlander, UFC champion, and we started matching fights - Bohlander versus Murilo Bustamante, Oleg Taktarov versus Sean Alvarez, who was a student of mine; but the main one would be Renzo versus Eugenio. The idea was to do a big event in Brazil and, if it worked, to go on doing events sponsored by the sheikh. But, as everything went wrong, he gave up on the idea. On the other hand, for not having gone well, the Abu Dhabi submission grappling tournament idea came about - or in other words, one door closed but another opened."

Here's Carlos Barreto vs Kevin Randleman match from UVF 6 in March 1997. That match, which Barreto won by triangle choke, fueled the fires of BJJ fans like myself who said wrestlers were only winning against BJJ because of their size advantages.

So for a while in the mid-1990s while the UFC was on the run in the U.S., unable to even get aired on pay-per-view in many jurisdictions, Brazil provided a home away from home for its native sport. Unfortunately, old rivalries between Jiu-jitsu and luta livre proved too combustible to build a professional sport around and it would be more than a decade before top-tier MMA returned to its native land.