UFC Can't Get Enough Of Brazil

Share All sharing options for: UFC Can't Get Enough Of Brazil 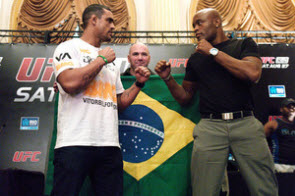 In fact, this weekend's UFC 134 is their first trip south of the equator since buying the promotion. But now that they've gotten a taste, they're looking to go back as many as four times next year. The UFC is known for making big plans for international expansion they don't always meet -- at one point they were talking about holding 6 events in the UK in 2011 and are settling for one -- but they must like something about the reception they're getting in Brazil.

UFC CEO Lorenzo Ferttita talked about their plans this week:

"We haven't laid the schedule out completely. We think we can come back here maybe four times next year. Maybe it's two big shows, maybe it's a couple or three Fight Night shows showcasing the younger Brazilian talent here. There's so many fighters from Brazil that we want to come down here, be permanent. We don't want to have a situation where we just come in and then we leave for two years. We want to have an ongoing business here.

"Part of the issue is that we've struggled not with the popularity in the UK. We have a huge fanbase. We do very well with selling tickets there but we've had a hard time getting a television deal that makes sense for us. We've got to move our business around to where it makes the most sense. We're not in any way abandoning them. We're coming back to England in November. We're having multiple dates in Europe next year as well so it's just trying to balance where our supply and demand is."