The Epic Trilogy: Frankie Edgar And Gray Maynard Set To Be MMA's First

Share All sharing options for: The Epic Trilogy: Frankie Edgar And Gray Maynard Set To Be MMA's First 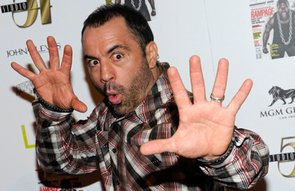 There have been famous trilogies in MMA history. Names like Chuck Liddell, Randy Couture, Ken Shamrock, and Tito Ortiz spring immediately to mind. But there has never been a truly great rivalry that took the sport to new levels artistically and athletically. According to UFC announcer Joe Rogan during an appearance on TapouT Radio, one may be brewing this year as Frankie Edgar and Gray Maynard prepare to meet for the third time at UFC 136:

"Just from a cinematic point of view, that last fight was so f*cking dramatic! There was so much going on in that fight, you know, Frankie Edgar getting ROCKED bad in that first round and it looked so close to being stopped so many times. I mean, you wondered like how does a guy come back from this, he’s getting f*cking battered and then what he did do? He comes back in the second round and he f*cking wins it and then he wins the third and he might have won every round other than the first and the real question became, how much damage did Gray Maynard do in the first? Some people think it was like a 10-5 round, a 10-4 round, it was ridiculous. He knocked him down, he hurt him, I mean is it just 10-8? If that’s just 10-8, that seems a little silly, that’s as close as you can get to stopping somebody and not stopping and beat him up for the whole round? To me, it might like 10-6 or 10-7, you know, it seems like a big round."

The key to the fight will be who will make the adjustments and be able to fine tune their game with their opponent specifically in mind:

"I’m really curious to see what kind of alterations either guy has made, you know, they must have watched that fight 100 times, they must be thinking about the moment what could have been different...They’re going to study those tapes and they’re going to come back and it’s going to be a fascinating fight. So that one I’m looking forward to just from maybe not even stylistically, just as a story, you know, just an amazing fight.