Chael Sonnen Not Accompanying Yushin Okami To Brazil For UFC 134

Share All sharing options for: Chael Sonnen Not Accompanying Yushin Okami To Brazil For UFC 134 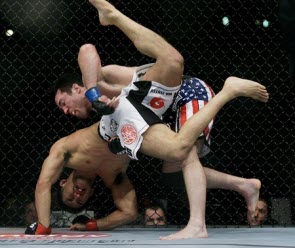 The big-talking UFC middleweight has apparently made enough of a spectacle of himself that he's not welcome in Brazil for the UFC's return to the country of MMA's birth.

He's been training Yushin Okami ever since beating Okami at UFC 104. Sonnen took a giant leap in prominence when he trash talked his way to a breakout performance against Anderson Silva at UFC 117. Since then he's made a habit of trashing Brazil and now it's come back to haunt him.

Sonnen said a major sponsor of Okami's requested he not attend the pay-per-view event, which takes place Saturday at Rio's HSBC Arena.

A source with knowledge of the situation told MMAjunkie.com (www.mmajunkie.com) that Praetorian, a Brazil-based MMA brand, threatened to pull the Japanese fighter's sponsorship if Sonnen attended.

"There's a line of people that want to kick his ass," the source said.