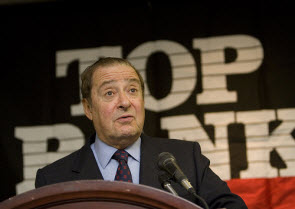 The UFC will be making its debut on the Fox network with two live MMA fights. Those fights will be over and done with before the Manny Pacquiao vs. Juan Manuel Marquez boxing pay-per-view.

That didn't stop Top Rank promoter Bob Arum from talking some smack about the UFC:

Dana White fires back after the jump:

"Let me tell you what: Todd Arum went crazy when he found out that we were going the same night as them," White told Yahoo! Sports. "He went crazy and called everyone in the industry flipping out. And Bob Arum is a jealous moron. Bob Arum had the ability to do great things for the sport of boxing. I don't know if he wasn't smart enough to do what we did or whatever, but when we first came out with this thing, this guy laughed at us. He said how stupid the Fertittas were and that this thing was ridiculous and it would never be a sport.

"Now, all he does is run around [expletive] and complaining about it. You had the ability, Bob Arum, to make boxing great. But the problem was, you were greedy. You're a greedy pig, just like all the other guys who were involved in boxing. All you ever did was try to rip money out of it. You never invested a dime into the sport of boxing to make it great, to make it last, to create a future for boxing. He's nothing but a greedy pig and his jealousy shows non-stop."