Share All sharing options for: The 1980s And 1990s: The Last Great Vale Tudo Era Of Brazilian MMA 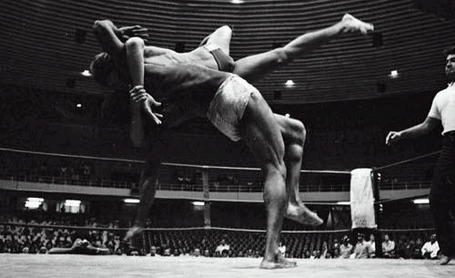 After the Gracie Brothers' "Heroes of the Ring" tv series was booted off the air for excessive violence in 1962 Vale tudo remained essentially a disgraced non-sport for the rest of the 20th century in its home country. That didn't mean that big fights didn't happen though.

Meltzer discusses the context of the 1970s and 1980s revival of vale tudo:

The sport once again was banned in Rio de Janeiro and didn't come back until 1975 when Kung Fu and Karate had become popular based on Bruce Lee movies. Every few years there would be events, usually based on rivalries between the jiu-jitsu and luta livre factions. In 1993, when Royce Gracie won the first UFC tournament, the Brazilian media didn't even cover it. With 63 years of knowledge of what happens when you put a Brazilian jiu-jitsu fighter against an opponent unfamiliar with the art, Brazilians had come to expect that outcome.

The Gracie family produced probably their most athletic exponent in Rickson Gracie who turned 28 in 1986. Rickson had the best jiu-jitsu technique of his generation, largely because he benefited from training under his cousin Rolles who died in 1982 in a hang-gliding accident.

More on Rickson from the Wrestling Observer (subscription required):

In 1980, 20-year-old Rickson Gracie emerged as the new Gracie fighting champion of the era. A year after Zulu lost to Pereira, Zulu stayed in town and made his reputation as a bad street fighter. Gracie, brought in as the undefeated (although it was actually his first Vale Tudo match, Gracie had been competing at a high level in Jiu Jitsu and was reputed to be the person who was going to become the next legend in that sport) fought Zulu on April 25, 1980, in Brasilia, winning via choke in the second round.

Vale Tudo returned to Rio de Janeiro in 1983, and the first major fight of the era was January 1, 1984, the Rickson Gracie vs. Zulu rematch, which drew a reported 20,000 fans to Maracana Stadium. Once again, Gracie won via choke in the second round.

Rickson built his reputation off of two famous bouts against Rei Zulu, a legendary vale tudo brawler, in 1980 and 1984. He later made his fortune fighting in Japan against questionable competition for big yen.

Here are the famous Zulu bouts:

Rickson Gracie vs Zulu 2 by bawzz

Rickson consistently refused to face Luta livre practictioner Hugo Duarte in a sanctioned bout, but he did challenge him on a beach in 1988:

Meanwhile Rickson's slightly younger contemporary Marco Ruas was perfecting the formula that would eventually become the dominant Brazilian fighting style by combining the no-gi grappling techniques of luta livre with Muay Thai striking. Here he battles a jiu-jitsu representative Fernando Pinduka to a draw in 1984:

Ruas would go on to win a UFC title at UFC 7, introducing leg kicks as a viable technique in MMA along the way.

Duarte's smaller training partner Eugênio Tadeu built quite a reputation when he combined good striking with grappling training and gave a young Royler Gracie everything he could handle. Here's part 1 of that locker room bout (part 2, part 3, part 4, part 5, part 6)

Here's Ismail's grudge bout with Tadeu from that event:

Part 2
In tomorrow's concluding chapter we'll look at the vale tudo events held in Brazil after the American success of the UFC in 1993/1994.