Share All sharing options for: UFC 134's Apathetic Forrest Griffin Doesn't Have Much Left To Prove 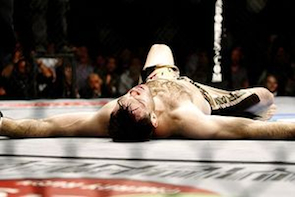 It's the UFC 134: "Rio" co main event. It's a battle between two former 205-pound champions. It's the rematch of an initial fight that was among the biggest upsets at the time.

For all intents and purposes, the showdown between Forrest Griffin and Mauricio Rua this weekend at the HSBC Arena in Rio de Janeiro, Brazil, should be an eagerly anticipated match up between two light heavyweights ranked among the top 10 in the world, according to the SB Nation / USA Today Consensus MMA Rankings.

"There isn't really any pressure to prove anything in the rematch," he recently deadpanned.  "I watched the [first] fight again and [Rua] looked pretty good to me.  [The upset win] wasn't like winning the belt or TUF, but beating 'Shogun' is up there. It's below winning TUF, which is the biggest thing I've ever done, and winning the belt, which is the second biggest thing I've ever done. It was obviously pretty big for me at the time because it's what got me a title shot.... I think this rematch is a reasonably good fight for me."

Griffin, 32, welcomed the Pride FC standout to the Octagon back in 2007, scoring an improbable third-round submission win over the talented Brazilian. It was so good, and so impressive, that the promotion anointed him the number one division contender shortly thereafter.

The former law enforcer from Augusta, Ga., would then shock the world once again with a decision win over then champion Quinton Jackson in his next appearance, closing the loop on a meteoric, storybook journey from zero to hero in little more than three years.

Unfortunately, that unlikely run is as good as it's going to get, apparently.

Griffin recently revealed that fighting hasn't been "exciting, fresh or fun since 2008," which is right around the same time he lost his belt to Rashad Evans at UFC 92. He also admitted that "it's a job, it's money" and that fighting "quit being fun when [he] realized [he] wasn't getting better."

Self-deprecating, sarcastic or not, Griffin's promotion of his fight this weekend against Shogun has been painful. Hopefully, it's all (another) bad joke.

Because this fight should mean something.