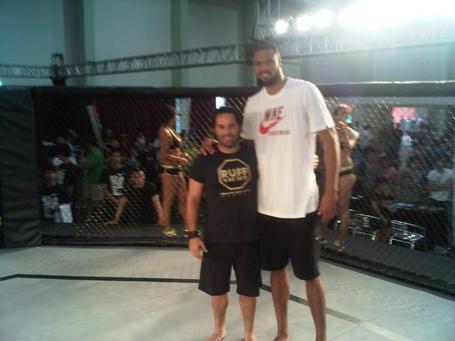 Here's a photo of Dallas Mavericks center Tyson Chandler after training a variety of grappling mixed martial arts techniques in China. The man to his right is Joel Gerson, the President/Chief Instructor at Revolution MMA & Fitness in Toronto, Ontario, Canada.

Why is Chandler training MMA and doing so in China?

It turns out Gerson was brought in by Shanghai-based MMA promotion Ruff to help run the MMA portion of the Nike Festival of Sport:

Shanghai-based Mixed Martial Arts (MMA) promoter RUFF, will participate in the upcoming Nike Festival of Sport (FOS) as part of our mission to educate the Chinese public about MMA and foster the development of an organic Chinese MMA culture.

Appearing in the FOS North Exhibition Hall, the RUFF interactive zone will feature demonstrations and training sessions with RUFF’s fighters, all of who will be appearing in RUFF’s upcoming debut event RUFF: Genesis on August 27th at the Shanghai QiZhong Tennis Center, as well as our 9-x-9 meter cage, where FOS guests can gain a better understanding of the MMA playing field.

Tyson is presumably at this festival to lend some star power to the event, particularly given the Chinese affinity for basketball.

Gerson's caption for this photo:

I just taught Tyson Chandler how to arm bar, do a rear naked choke, hit a double leg, etc in front of 500 people. I'm thinking its only fair he teach me how to dunk. We're sending the video of us training to TMZ--it's hilarious.

The photo is blurry, but here's a larger res version for your viewing pleasure: