Bellator's Pat Curran Makes A Case For The Top Ten

Share All sharing options for: Bellator's Pat Curran Makes A Case For The Top Ten 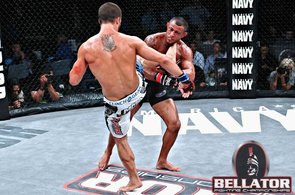 Maybe it was the blood that woke Pat Curran up. The former Bellator lightweight tournament winner was on his way to falling behind Marlon Sandro two rounds to none when a cut opened next to his left eye. It seemed to reinvigorate Curran, who nailed Sandro with a right roundhouse kick to the head, a blow that won him $100,000 and a second Bellator tournament championship in one fell swoop.

With the win over Sandro, ranked fifth in the SB Nation/USA Today Fighter Rankings, Curran makes a strong case for being a top ten fighter in the featherweight division.

Just 23, the Illinois based fighter has suddenly catapulted onto the short list of the sport's best prospects. Bloody Elbow's Leland Rolling has more on a result that shocked many:

Many fans were under the assumption that Curran wouldn't be able to hang with the heralded striking skills of Marlon Sandro. Sandro had made quite a name for himself by crushing the opposition in Japan, knocking out multiple opponents during his reign under the Sengoku banner. The hype was certainly overwhelming for Sandro, but Curran's technically sound striking game and ability to adjust in the middle of the fight helped him cap off an impressive tournament win on Saturday night.

Curran knocked out Sandro at the 4:00 mark of the second round with a shocking head kick that left the former Sengoku champion limp on the canvas. For the first nine minutes of the fight, Sandro was controlling the tempo, landing the better punches, and proving that his power, even when blocked by Curran's defenses, was enough to steal rounds. He aggressively lunged in at Curran, throwing a straight punch-overhand combination that Curran seemed hesitant to counter. When Curran was on the defensive, his lacking head movement and inability to pull the trigger left him beaten and battered as the fight progressed. In a nutshell, Pat Curran wasn't well on his way to victory before crushing the dreams of Marlon Sandro.

The fight brought Bellator's fourth season to a close. The staff and fighters will get almost three weeks to refresh and recharge before the fifth season kicks off on MTV2 on September 10th.