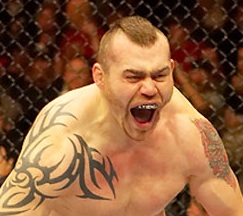 Former UFC heavyweight champion Tim Sylvia continues his uncanny tour across America with a recently confirmed bout against journeyman Brian Heden. The bout will headline the "Fight Tour" event scheduled for the Rockford MetroCentre on August 20 in Rockford, Illinois.

Once at the pinnacle of his profession, Sylvia's career has now become a sad reflection of the highs and lows of this unforgiving sport. Freed from the tyranny of the UFC's weight restrictions, the 35-year-old ballooned in size, weighing-in at a startling 311 pounds for his last fight -- a January scuffle against Abe Wagner that lasted all of 32 seconds. Wagner caught the two-time champ early, sending Sylvia to his third loss in seven fights since leaving the promotion.

While every event blooms with the potential of a career revival, in all likelihood the "Maine-iac's" next bout -- just like his last -- could serve as sad reminder of just how far he has fallen. MMA fans should remember the champion who tied for the most successful heavyweight title defenses in UFC history (three) and refused to quit after breaking his arm against Frank Mir, as opposed to the swollen castoff that lost to the likes of Wagner and Ray Mercer in a combined 41 seconds.