Will UFC Call On Tito Ortiz And Chuck Liddell For Fox Television Debut?

Share All sharing options for: Will UFC Call On Tito Ortiz And Chuck Liddell For Fox Television Debut? 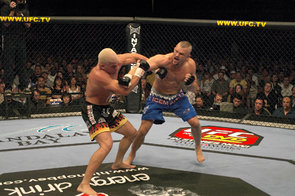 We now know that the UFC will kick off their new deal with Fox this year, airing a one hour special on November 12th, location and fight card to be determined. The show is set to feature two televised fights during a one hour broadcast. Who will get the honor of representing the promotion in these critical early bouts? They will be key in both introducing the sport to new viewers and showing Fox that the UFC is capable of pulling big ratings.

The last time the UFC got a chance to make a Fox debut, they threw a curve ball. Instead of an established star like Vitor Belfort, they decided to feature two up and coming prospects in an action fight. That might have been acceptable in 2002. In 2011, fans are a little savvier. MMA has been on television for five years and just putting two men in the cage isn't enough to garner interest.

The opening bout should certainly be a fight that wows viewers with action and skill. But the main event has to pack star power. Who better than Tito Ortiz? The former champion has been one of the UFC's top pay per view draws for a decade. With a win over prospect Ryan Bader, he's once again relevant in his division. And, the UFC has the perfect opponent.

Yes, the "Iceman" Chuck Liddell is retired. But you know he'd be willing to put on the gloves one more time for a third fight with Ortiz. The two were set to meet last year - even filmed opposite each other on The Ultimate Fighter. An Ortiz injury caused that fight to be scrapped. I say dust it off and give Liddell a final send off - on the biggest stage the sport has ever had. It would be a fitting tribute to two of the promotion's all-time legends.