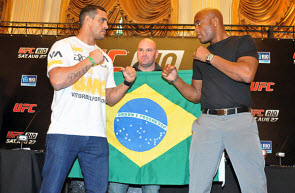 The UFC has reportedly given Belfort the title of "Ambassador of the UFC" in Brazil. His job will be to reach out to the Brazilian media and sell the UFC, since he is a well known person in Brazilian culture even outside of MMA. "I am part of the past, I live the present and I will be part of the future of the UFC," Belfort claimed. Having gone through many popular TV programs selling the UFC Rio card in Brazil, Belfort will also be part of the commentator’s team that will broadcast the UFC Rio card to network TV in Brazil.

"They (the UFC owners) just told me: ‘go and do what needs to be done (to market the UFC)’" Belfort replied in regards to his new job. "The Fertittas and Dana believe a lot in me to pass through to the media and to the public the magnitude that will be UFC Rio", "even if they hadn’t contracted me, I’d still be doing this (trying to market the UFC). I have conquered this spot with my attitudes, I have always brought MMA to the public and to network TV, even when there was prejudice (against the sport). This is recognition for what I have done not only now, but also inside the ring" he finalizes.

"I'm part of the past, live the present and future will be in the UFC," said the now executive, who in his journey after the recent victory against Yoshihiro Akiyama, already faces a marathon of interviews, having gone through television shows such as "High Hours "and" In Front with Gabi. " UFC In Rio, it will be broadcast live commentator on the RedeTV! .