Share All sharing options for: PHOTO: UFC On Fox Logo And Television Set 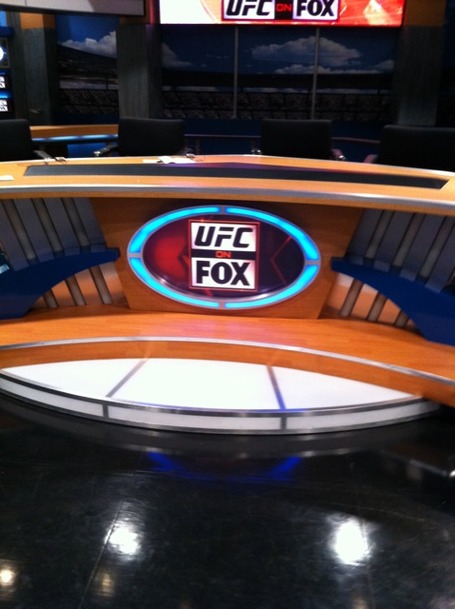 Ariel Helwani has posted a photo of the picture of what we can presume to be the UFC on Fox television set. Much like the NFL on Fox, the logo features the abbreviation of the sports league with the Fox name. We don't really know who is going to man the desk. Could it be familiar figures like Kenny Florian or does he have a non-compete? What about Jay Glazer, who is a Fox employee? Maybe even Gus Johnson.

It's impossible to know at this juncture. What is clear is that the two brands existing in one space already seems to have elevated the UFC and the sport of mixed martial arts. Perhaps I'm reaching in these early moments for this deal to have greater relevancy. Maybe that's selfishly true. I don't know. But just having the trimmings of a network's touch on the UFC product feels fun, feels run and is creating excitement. I doubt I speak only for myself.