Share All sharing options for: Krzysztof Soszynski Says Most Fighters Are Doping 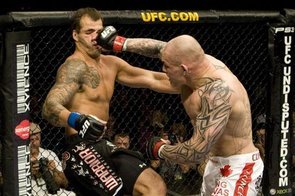 Soszynski should have a good idea of what "juiced" looks like. Once 318 ripped pounds, he's spent time in professional wrestling and body building, both sports rife with drug abuse. Sosynzki made a case that only truly random, out of competition drug testing will rid MMA of performance enhancing drugs:

"Ten weeks out, eight weeks out, six weeks out -- that's when all the training happens. That's when you're training at your hardest, at your peak. Every athlete who knows how to train properly knows they're going to have to taper off two weeks, two and a half weeks out from their fight so they'll be in perfect condition for their fight. All the hard training happens eight, ten weeks [from the fight]. That's the time when everybody's doing their drug abuse and that's when they're taking their testosterone and their steroids. That's when I think fighters should be tested."